But wait… it is not Disneyland, Universal Studios, or the numerous theme parks dotting this land that is the center of attention.  Rather, it is the once-every-three-years international show called NPE, held at the Orange County Exhibition Center. A grand reunion of more than 65,000 professionals who is who in the plastics industry worldwide!

For as far as it can be remembered, Chen Hsong has been a regular fixture of the NPE show, exhibiting there since the 1990’s. This time around, however, there is something different.  Something magical.  And it all starts with a single number: 60. 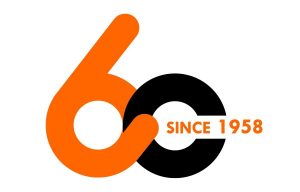 Yes, Chen Hsong just turned 60 years old in 2018!  What a cause for celebration indeed! From humble beginnings as a small mechanical repair shop opened in 1958, to eventually becoming one of the largest producers of injection moulding machines in the world, and one of the industry’s undisputed leaders, Chen Hsong has been with the plastics industry for a solid 60 years.

But the booth you see in NPE is not that of an old 60-year-old company.  Instead, it shows remarkable dynamism and energy amidst decades of know-how, technical expertise and professionalism.  This is the “New Chen Hsong,” a new rendition of Chen Hsong into the “Next” 60 Years.  And somehow, it feels just magical. 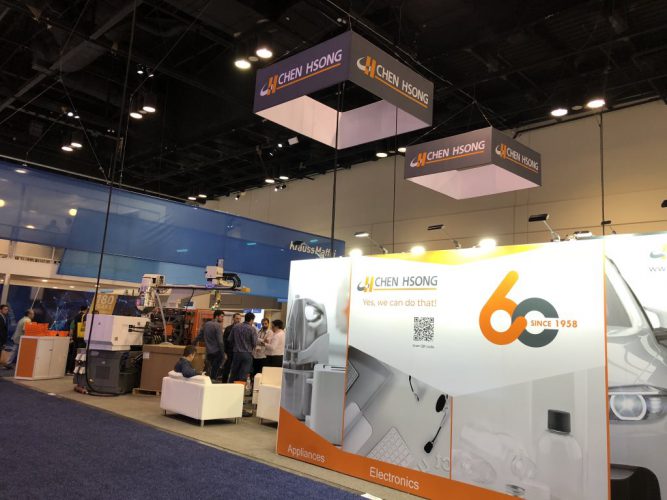 The USA, being one of the largest markets for plastic processing in the world, and one of the highest-end markets for injection moulding machines, has been in the sights of Chen Hsong for quite a while. This year, in 2018, Chen Hsong enters the USA in force, forming a partnership with a couple of industry veterans to form CH-America, responsible for the sales and service of Chen Hsong products in the USA and Canadian markets.

Headquartered in Torrington, Connecticut and with branch offices in Detroit, Michigan and Dallas, Texas, Ch America is committed to providing the world-class professional service that worldwide clients of Chen Hsong have come to expect.

Orange is The New Black

And what is NPE without demonstrations of advanced technologies, the “latest and greatest” that each can offer?  This year, Chen Hsong displayed two high-end machines in the main hall (W205 to be exact, right next to Krauss Maffei) – the amazing super-star JM208-MK6, as well as the SM700-TP advanced two-platen. These two machines, configured to complete US standards and meeting every aspect of the market’s expectation, have been drawing crowds of visitors non-stop, from morning till evening. 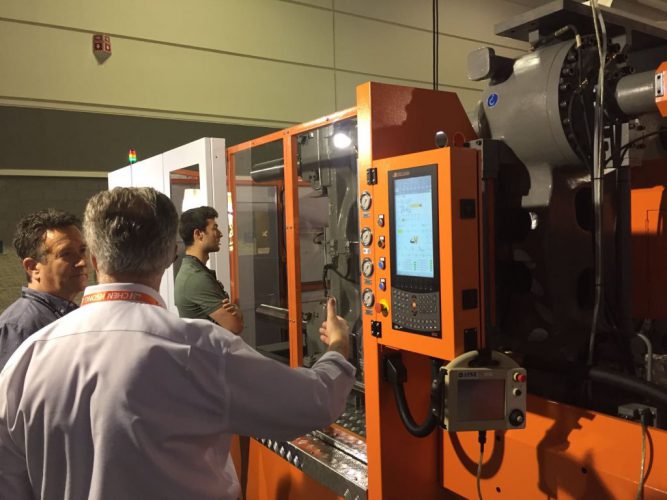 Talking about non-stop… that’s exact the “secret weapon” offered by the SM700-TP two-platen machine for USA molders – the Japanese Non-Stop™ to be exact.  This cutting-edge technology – a product of Chen Hsong’s 8-year-long (and still going strong!) worldwide strategic cooperation with Mitsubishi of Japan – actually comprises of a package of related technologies designed to work together to make a machine very, very stable indeed.  In fact, Non-Stop™ guarantees unscheduled down-time of less than 0.5% annually – now that’s wild! 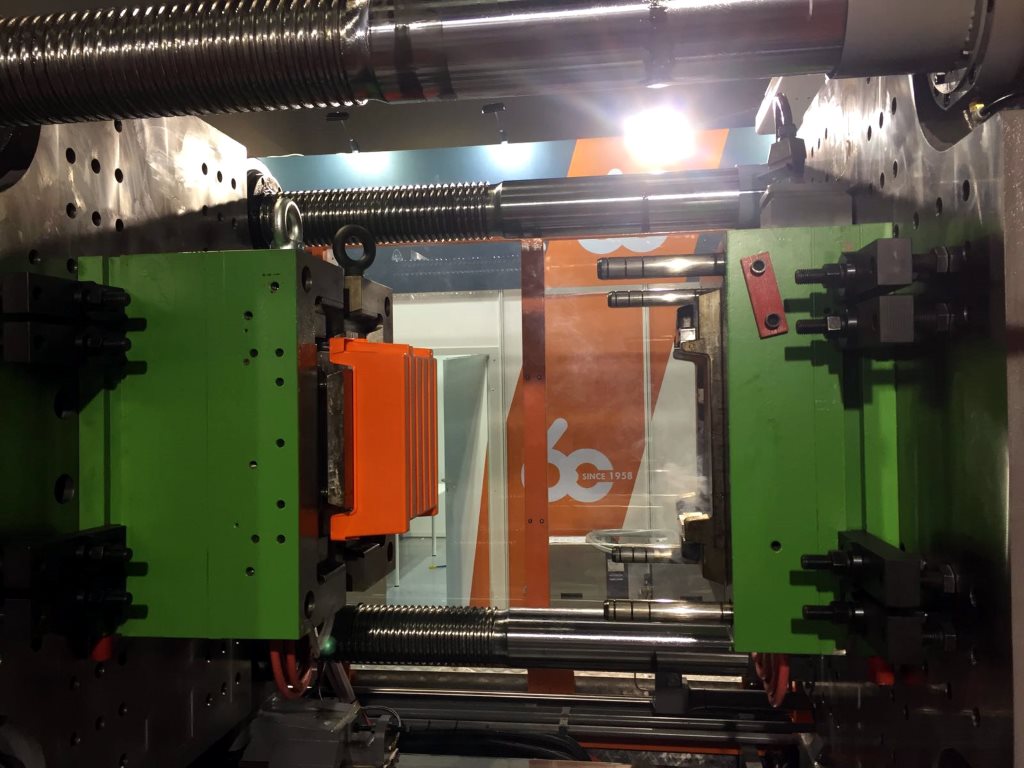 During the show the SM700-TP made a nice stackable crate, non-stop, from morning till evening without human intervention.  The crate was an instant hit – visitors grabbing them up as fast as they’re being produced!  If you visited NPE this year, and wondered where all those orange-colored crates everybody had in his/her hands came from…  now you know!

In addition to a two-platen machine that just doesn’t stop (so you can stop… and rest easy), the new superstar product line of Chen Hsong also put in a showing here – the simply amazing MK6. This line of fast, precision and stable small-to-medium machines encapsulates so much advanced technologies – the amazing Japanese Precision Hydraulics™ for example – that it can really be called a technological marvel. 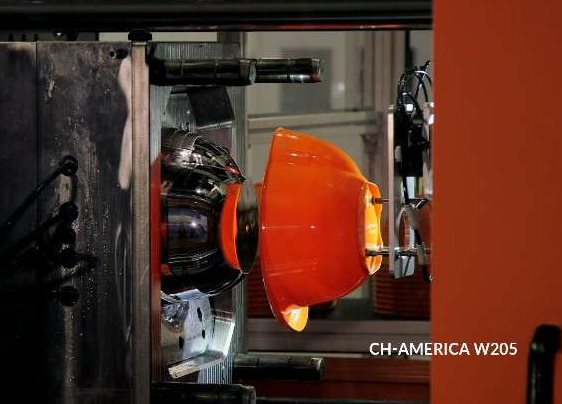 Making a nice household strainer (also orange in color of course), the JM208-MK6 runs so quiet, all its motions so snappy, so fluid, so silky-smooth that it never fails to astonish all who set eyes on it. Visitors brought back more visitors, and there was a constant crowd in front of the machine all day long. The strainers, of course, were also an instant hit with orange bowl-like objects in the hands of just about anybody you bumped into!

As one of the visitors who (patiently) waited in line to get his strainer said it all, “Orange is the new black!” 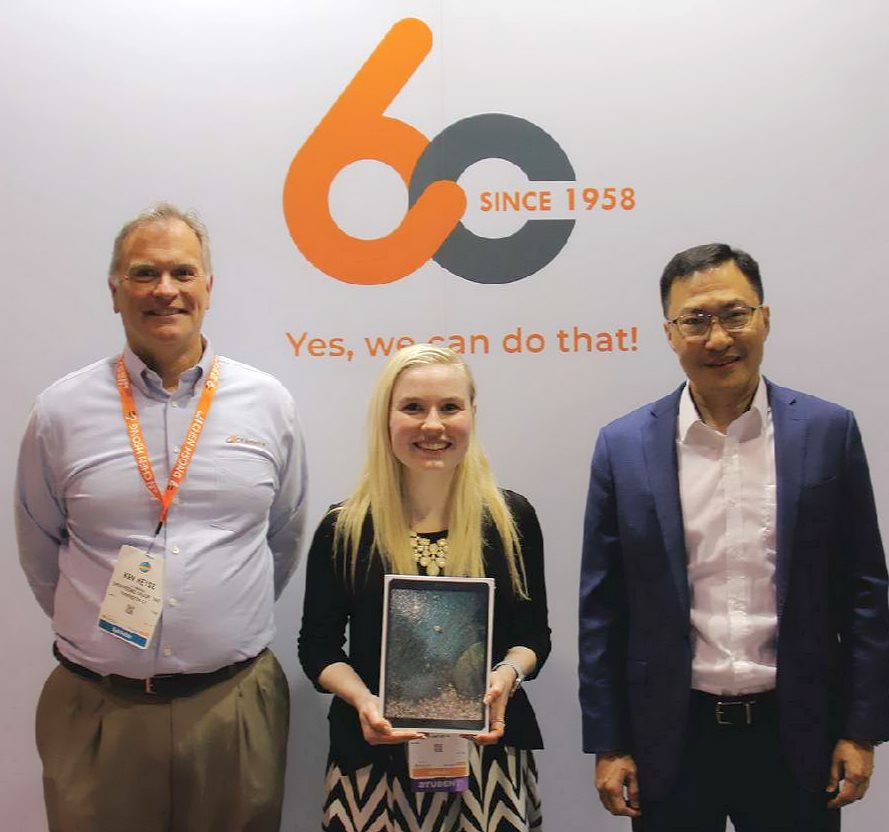 To celebrate the launch of CH-America as well as the 60th Year Anniversary of Chen Hsong, we give away one iPad Pro per day in a grand lucky-draw. Now lucky draws are nothing to brag about, but there is something exciting about one of the lucky winners – on the third day of the draw, a visiting student from Ferris State University in Michigan by the name of Kellie Grolle!  Her number being picked by a random number generator, she just couldn’t believe that such a thing can happen!

See it for yourself in the award photo.  Does she look thrilled or what?

Be seeing you there, at the CH America booth!

The Chen Hsong Group has offices and distributors all around the globe.
Select your region from below or search our global list of distributors.